Mario Merz was born in Milan in 1925. After studying medicine in Turin for a short time, Mario Merz joined the anti-fascist resistance group "Giustizia e Libertà" (Justice and Liberty). In 1945 he was arrested for his political work and spent a short while in prison.
After his release he spent some time in Rome and Paris. It was then that he started to turn to art. Merz settled in Turin. Initially, Mario Merz painted in oil until he began producing informal spiral pictures in 1960.
In 1966 Mario Merz gave up informal art and looked for metaphors for the connection between nature and art in objects themselves. He began producing his famous light objects, and combined neon tubes and neon writing with everyday objects such as bottles and umbrellas. These objects turned Mario Merz into one of the main exponents of Arte Povera.
From 1968 Merz produced his typical igloos, in which he found a metaphorical shape for the connection between inside and outside, for the sheltering and the protecting. One year later Mario Merz's work repeatedly featured Fibonacci numbers. In 1977 he returned to gestural, color-intensive painting, but combined it with objects, Fibonacci numbers and other iconographic motifs.
Mario Merz died in Turin in 2003. 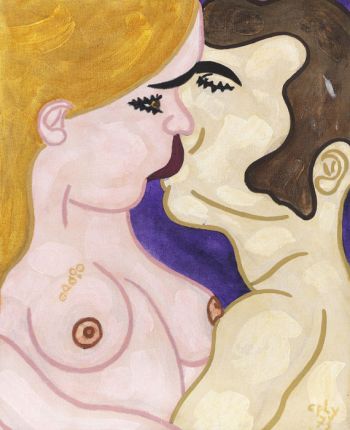